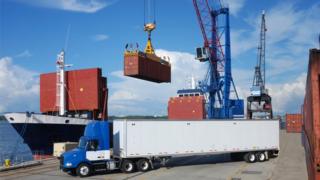 Image copyright Getty Images Image caption Only 1,200 annual permits of the 40,000 required were offered across the UK, the haulage industry says

Northern Ireland haulage firms could face disaster in the event of a no-deal Brexit due to a lack of permits to drive in the EU, it has been warned.

The deadline has passed for lorry drivers applying for licences to drive in Europe after a no-deal Brexit.

The haulage industry says only 1,200 annual permits were offered across the UK, but that 40,000 were needed.

The UK Department for Transport (DfT) had assumed permits would not be needed for drivers to cross the Irish border, said the association’s Seamus Leheny.

“I’ve checked this with the Irish government, they know nothing about any such deal to not require permits into the Republic of Ireland,” he said.

“If we need to overcome that, we will need to put the Permits Bill back into parliament and we will be asking MPs to vote to give permits to Northern Ireland.”

A DfT spokesperson said: “We do not expect Northern Irish hauliers to require a permit to travel to, or through the Republic of Ireland, and the joint 2017 report with the EU made clear both parties’ steadfast commitment to preserving cross-border cooperation on transport.”

The permit system doesn’t acknowledge companies who cross the border into the Republic as it assumes there will be a bilateral deal with the Republic of Ireland.

However, until the UK leaves the EU, no such deal could be made.

This makes it difficult for Northern Irish logistics firms to plan for whatever happens when the UK leaves the EU on 29 March.

It could also have a knock-on effect on any firms who use these firms to deliver goods.

The existing legislation doesn’t include Northern Ireland, which means that bill will have to go back to Parliament.

In the event of a no deal, that could mean asking MPs in other parts of the UK to agree to give more permits to Northern Ireland.

But permits will be in high demand across the UK.

A spokesperson for the Irish Department of Transport said: “It is not possible at this stage for the department to outline what regulatory regime will be in place in Ireland and the wider EU for UK licensed road transport operators in the various potential post-Brexit scenarios.