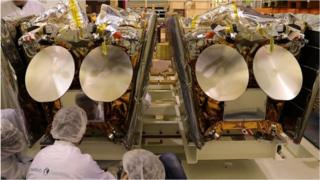 MPs have launched an inquiry into the government’s $500m (£400m) investment in bankrupt satellite firm OneWeb, amid disclosure that a top civil servant warned that taxpayers could lose out.

The government took a stake in the satellite broadband company as part of a post-Brexit space strategy.

It emerged on Wednesday that an acting permanent secretary raised concerns, warning that the deal was “unusual”.

Mr Jones, chairman of the Business, Energy and Industrial Strategy Committee, said in a statement that news of the permanent secretary’s worries “heightens concerns around this investment” and “prompts further questions about how the government… came to plump for this largely US-based bankrupt satellite company”.

He went on to say that “using nearly half a billion pounds of taxpayer money to gamble on a ‘commercial opportunity’ whilst still failing to support manufacturing jobs with a sector deal is both troubling and concerning.”

OneWeb is creating a satellite network to support broadband and GPS services. But the firm collapsed in March, blaming the Covid crisis for not being able to raise more financial support.

Earlier this month, a joint offer from the UK government and India’s Bharti Global mobile operator won a bidding war for the firm.

But it was disclosed on Wednesday that Sam Beckett, the top civil servant in the Department for Business, Energy and Industrial Strategy (BEIS), said all the money put forward could be lost.

“While in one scenario we could get a 20% return, the central case is marginal and there are significant downside risks, including that venture capital investments of this sort can fail, with the consequence that all the value of the equity can be lost,” she wrote.

The comments were part of a letter for “ministerial direction”, an avenue for civil servants to register a stronger than usual opinion. Ministers are obliged to formally overrule the official’s objections to instruct the spending to go ahead. The contents of the letter must also be made public.

Ms Beckett said that an assessment by the UK Space Agency had identified “substantial technical and operational hurdles” that OneWeb would need to overcome in order to become a “viable and profitable business” and there was a high likelihood that further taxpayer funding would be necessary.

However, Business Secretary Alok Sharma overrode Ms Beckett’s concerns and the government went ahead with the bid.

Mr Sharma said Chancellor Rishi Sunak had agreed to the purchase, and other private sector investors were involved in the bid for OneWeb.