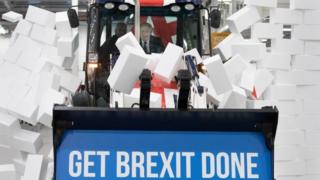 Politics can be an expensive business. Parties put a lot of time and effort into attracting the big bucks.

But who has come out on top in the past ten years? And where has the cash been coming from?

Since 2010 parties have received £541m in large donations from companies, individuals and – for Labour – trade unions.

Income has fluctuated year-by-year and there were clear spikes leading up to the four general elections that have taken place in the past decade.

But 2019 broke all records, thanks largely to a massive inflow of cash into the Conservative Party.

The total amount of donations to all parties almost tripled between 2018 and 2019, rising to £104m, more than half of which came in the last three months of the year.

Where is the money going?

Every party’s income gets a boost around election time, but the Conservative Party has been consistently ahead of the curve. The gap between the two main parties was £1.4m in 2011, but had rocketed to £35m by 2019.

Parties have to register donations over £7,500, or a combination of smaller donations if they come from the same source.

So these numbers do not include a large chunk of money that trickles in from smaller donors. For example, during the 2019 election, the Labour Party – which has more than twice as many members as the Conservative Party – said two thirds of its donations were under £20.

Image caption All parties followed a similar pattern, but the Conservatives were consistently ahead of the curve

The 2019 spike for the Liberal Democrats was largely thanks to the biggest single political donation on record: £8m from Labour peer – and former Labour minister – Lord David Sainsbury.

The supermarket magnate – who said in 2017 he would no longer fund political causes – handed over the money to the anti-Brexit Lib Dems before the December election campaign kicked off.

Lord Sainsbury was also responsible for the second largest donation from an individual on record, when he gave £2.2m to the Labour Party in 2016.

Single donations like these can transform a party’s finances. The Conservative Party’s largest source of money over the decade has been JCB, which has also provided a reliable source of venues for photo opportunities.