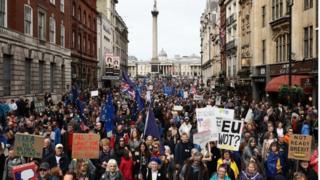 The board of the People’s Vote campaign has written to the Electoral Commission asking it to investigate donations made to the group under previous management.

The organisation – which wants a second referendum on Brexit – said it believed some payments may not have been declared properly.

People’s Vote said it was “extremely concerned” over this suggestion.

Its request for an inquiry follows a dispute over management, which resulted in some senior figures being sacked.

At the end of October, People’s Vote’s then director, James McGrory, and its head of communications, Tom Baldwin, were dismissed.

Many staff subsequently staged a walkout in protest and refused to return to work.

Two of the youth organisations that made up the People’s Vote campaign broke off, while a new group campaigning for another referendum, Final Say, was established with Mr McGrory and Mr Baldwin as advisers.

A People’s Vote spokesperson said: “The People’s Vote is asking the Electoral Commission to look into possible non-disclosure of donations under the organisation’s previous executive management.

“The new interim management team, in place since beginning of November, has been conducting a fundamental review of the organisation’s systems, policies and processes.

“In the course of this