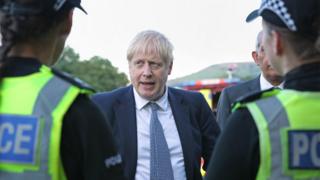 The government will create room for 10,000 new prisoners and expand stop and search powers, Prime Minister Boris Johnson has promised.

Writing in the Mail on Sunday, Mr Johnson said after a “spate of violent crime… the time for action had come”.

The government’s focus on law and order will add to speculation that No 10 is preparing for an autumn general election, said BBC political correspondent Jonathan Blake.

It follows other recent announcements from Downing Street about the NHS and immigration.

In the Mail on Sunday, Mr Johnson said the 10,000 new prison places will be created by building new jails and expanding existing ones, at a cost of up to £2.5bn

The money has already been approved by the Treasury, with Mr Johnson calling the investment “long overdue”.

He also argued that too many serious violent or sexual offenders are coming out of prison long before they should, and tougher sentences were needed.

On Monday, Mr Johnson will sit down with representatives from the police and criminal justice system to discuss sentencing.

“I want the criminals to be afraid – not the public.”

Mr Johnson also confirmed that a pilot scheme allowing police to stop and search someone when they believe a crime may – rather than will – be committed, will be extended to all 43 forces across England and Wales.

The scheme was first introduced in seven police force areas in March by Sajid Javid when he was home secretary.

It lifts restrictions over using section 60 stop and search, which – during a limited time period – gives police the power to stop individuals in a designated area without reasonable suspicion.

Inspectors will now be able to use it without seeking the authorisation of a senior officer.