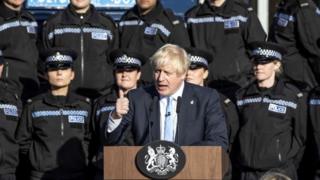 Downing Street says it will “learn lessons” after Boris Johnson was accused of using the police for political purposes.

The PM made a speech at a police training unit in Wakefield, with 35 officers stood behind him.

He was meant to be launching an officer recruitment drive but also talked about Brexit and other policies.

He said he had understood the speech made last month would be solely about police officer recruitment.

In reply to media questions, Mr Johnson said he would rather be “dead in a ditch” than ask the EU for a delay to Brexit – a line that dominated headlines.

Now, Cabinet Secretary Sir Mark Sedwill has said there should have been a “clearer delineation” between government policy aspects of the speech and political content.

But he said he had seen “no evidence” of a “deliberate attempt” to involve police officers in political activity.

His findings are contained in a letter, seen by BBC News, which was sent to Labour’s shadow policing minister, Louise Haigh.

She said: “The prime minister’s desperate attempt to use the police as a party political stunt backfired wildly and the civil service’s unease at his behaviour is obvious.

“This is a prime minister that cannot be trusted to behave properly, tell the truth or run the country.”

Sir Mark said the visit, to promote the campaign to hire an extra 20,000 police officers, had been planned “in the usual way” by the Downing Street visits team, working with the Home Office and with