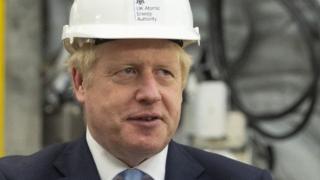 Boris Johnson has instructed government departments to devise a new fast-track visa system to attract leading scientists to work in the UK.

The PM plans to scrap the cap on “tier one” visas for highly skilled migrants – currently the limit is 2,000 a year.

He also wants to make the system easier for scientists and their families.

Science bodies have welcomed the proposals but warn any benefits to research would be greatly outweighed by the damage caused by a no-deal Brexit.

The prime minister made the announcement at the Culham science centre in Oxfordshire which undertakes research on fusion power.

The reforms are small beer compared to the chaos, disruption and damage to the UK’s attractiveness to international collaborators & mobile talent that will result from a no-deal Brexit”

The Home Office and the Department for Business, Energy & Industrial Strategy (Beis) are the departments involved in preparing the new visa process.

Speaking exclusively to BBC News about the announcement, he said that he wanted to see a greater openness to scientific top talent from around the world.

“We’re going to turn the UK into a kind of supercharged magnet, drawing scientists like iron filings from around the world coming to help push forward projects like this (fusion research in Culham) in which we can not only take a scientific lead but a commercial lead as well,” he said.

Image copyright Culham Image caption The Culham facility carries out research into nuclear fusion. It is among the scientific organisations that would benefit from Mr Johnson’s proposed visa system for scientists

EU researchers account for half of the total UK scientific workforce of 211,000. Currently, they don’t need visas to work in British labs.

Those from outside the UK currently need to go through a rigorous process supervised by the Home Office. The process is time consuming, taking up to 100 days and costly, with a bill of about £8,000.

After Brexit, new applicants from EU countries will have to go through the same procedure, prompting fears of a large scientific skills shortage.

In response, Mr Johnson has asked the Home Office and Beis to develop a system that has no limit on numbers allowed to work in the UK under the tier one exceptional talent visas. He also wants them to expand the pool of UK research institutes and universities able to endorse candidates.

In addition, he wants officials to come up with criteria that confer automatic endorsement, subject to immigration checks,