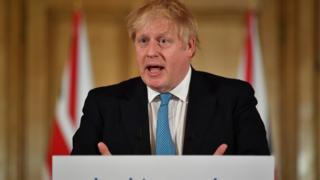 The UK can “turn the tide” on the coronavirus crisis within 12 weeks, Prime Minister Boris Johnson has said.

But pressed on what he meant by the three-month timescale, he said he did not know how long it would go on for.

He said trials on a vaccine were expected to begin within a month and warned he would “enforce” Londoners to be kept apart “if necessary”.

Earlier, in a message to the nation, the Queen urged people to come together for the common good.

Speaking in Downing Street, Mr Johnson told reporters: “I believe that a combination of the measures that we’re asking the public to take and better testing, scientific progress, will enable us to get on top of it within the next 12 weeks and turn the tide.

“I cannot stand here and tell you that by the end of June that we will be on the downward slope.

“It’s possible but I simply can’t say that that’s for certain,” he added.

“We don’t know how long this thing will go on for. But what I can say is that this is going to be finite.”

Mr Johnson went on to rule out closing down public transport in London but pointed out people in some parts of London were not following government guidance on social distancing and would be “enforced” to do so if necessary.

“I know how difficult it may be or it may seem right now, but if we do this together, we will save many, many thousands of lives,” he added.

He also urged businesses to stand by their employees “because we will stand by you”, adding that his chancellor would be making further announcements on Friday.

In the UK, 144 people with coronavirus have died, and 3,269 people have tested positive for it.

Speaking alongside the PM, Prof Chris Whitty, the UK’s chief medical adviser, warned there would be a “lag” before the public’s efforts to stem the spread of the virus would slow down case numbers.

He said there would be a “global issue” in the supply of personal protective equipment (PPE), saying NHS workers were right to complain about the shortages.

The government was “in negotiations to buy a so-called antibody test” which could detect whether a person has had the disease,