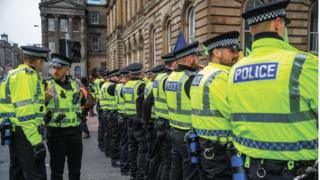 Police Scotland have spent more than £7m on planning for Brexit.

The figure has been released in a Brexit contingency planning report due to be discussed by the Scottish Police Authority (SPA) this week.

It also states that civil unrest is one of the biggest potential issues facing policing post-Brexit.

It comes as leaked government documents appear to show that Britain faces shortages of fuel, food and medicine, in the event of a no-deal Brexit.

Deputy Chief Constable Will Kerr will present an update to an SPA board meeting in Stirling on Wednesday.

The report has revealed that a planning team are preparing the force for any civil unrest and demonstrations.

A separate delivery team is planning to ensure international investigations and intelligence-sharing are maintained post-Brexit.

The number of officers working in the force’s international bureau has been increased and arrangements made to exchange biometric data such as DNA, fingerprints and vehicle registration details with EU member states.

A “force reserve” has been established since 5 August, located in five hubs across Scotland. This group of officers has already been deployed at events including football fixtures, Extinction Rebellion activity and Edinburgh’s summer festivals.

The report stated: “Brexit is a highly contentious subject and the Brexit contingency planning team are fully aware of the potential civil unrest.

“Brexit intelligence officers continue to monitor social media sites in order that Police Scotland can prepare and respond to any potential protests.”

It comes as The Sunday Times printed leaked government documents warning of food, medicine and fuel shortages in a no-deal scenario.

A No 10 source told the BBC a former minister leaked the dossier to try to influence discussions with EU leaders.

The documents say the cross-government paper on preparations for a no-deal Brexit, codenamed Operation Yellowhammer, reveals the UK could face months of disruption at its ports.

It also states that plans to avoid a hard border between Northern Ireland and the Republic of Ireland are unlikely to prove sustainable.

However, the UK government has sought to pl