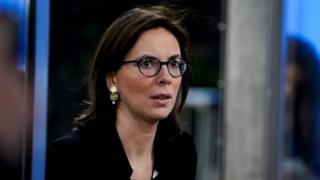 The EU will not be pressurised by “artificial deadlines” in its post-Brexit trade talks with the UK, France’s Europe minister has warned.

Amelie de Montchalin said the EU would not sign just “any” deal by the end of the year, saying “substance was much more important than deadlines”.

The UK has said it could walk away from the talks in June unless there was the “broad outline” of an agreement.

The process, to be conducted in English, will begin on Monday.

Details of what will be discussed and when have been published, with topics to be covered in the first round of negotiations including trade in goods and services, transport, energy, fisheries and “fair and open competition” in future dealings.

Further rounds of negotiations will take place every two to three weeks, alternating between London and Brussels.

The session in June, in which both sides will “take stock” of progress made at that point, is likely to prove crucial.

The UK has ruled out extending the process beyond the end of the year, when the post-Brexit transition period will end.

The UK and EU have agreed a schedule for negotiations based on 11 simultaneous streams, including one on the controversial subject of “a level playing field for fair and open competition”.

Eighteen days of talks have been scheduled until mid-May but the UK has not agreed to negotiations on defence or foreign policy, which the EU side wanted.

The document says the working groups do not necessarily reflect the structure of the final agreement and the arrangements could change. The two sides can also speak to each other outside the formal rounds.

The negotiations in Brussels will take place in a conference centre, not at the headquarters of the European Commission, although the “plenary sessions” and meetings between the chief negotiators will be held there.

Friday’s document, which sets out the terms of reference for the talks, says June’s “high-level” meeting between chief negotiators David Frost and Michel Barnier will aim to “agree actions to move forward in negotiations on the future relationship”.

Speaking at the Chatham House think tank in London, Ms de Montchalin said the EU would “not accept time pressure” and was “not ready to sign any kind of a deal on December 31 at 11pm”.

“We cannot let our level of ambition be affected by what I would call artificial deadlines,”