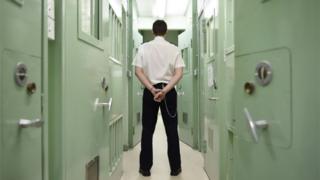 Prisons in England and Wales are to receive £100m to improve security and cut crime, the government has said.

Airport-style security – such as X-ray scanners and metal detectors – would be introduced in more prisons, it said.

But Labour accused him of “tinkering”, adding cuts had led to “unprecedented levels of violence in our prisons”.

It comes after Mr Johnson announced a programme to create 10,000 additional prison places and said the Crown Prosecution Service would receive an extra £85m over the next two years, to help deal with a rise in violent crime in England and Wales.

It also follows government initiatives for the NHS and immigration, which have sparked speculation about an early general election – although Mr Johnson has ruled one out before the Brexit deadline of 31 October.

Announcing the extra money for prison security, Mr Johnson said the fresh investment was important because the public must “see justice being done, punishment being served and feel protected”.

Although most prisons already have some “airport-style” security controls, Mr Johnson said the extra money would be invested in struggling prisons – to help prevent drug smugglers from “fuelling a rise in violence and self-harm”.

January saw the number of assaults in prisons in England and Wales reach a record high. This number includes attacks by inmates on other inmates and those which target staff.

The Ministry of Justice said the £100m funding was newly-released by the Treasury and would be made available immediately.

It will fund an increase in “cutting-edge technology” to detect and “block mobile phones”, which criminals use to “organise drug supplies” or harass victims from their cells.

Justice Secretary Robert Buckland said there was a direct link between crime inside of prison and “crime on our streets”.