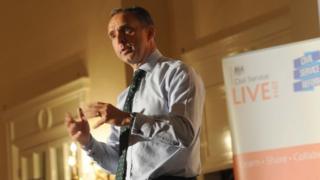 Less than a year ago, Sir Mark Sedwill welcomed a smiling Boris Johnson to Downing Street after he became prime minister.

Now, it is Sir Mark’s turn to signal his exit from No 10.

Perhaps more so than any of his recent predecessors, he aptly fits the historical description of cabinet secretary as being one of the most powerful people in the country the public have never heard of.

The 55-year old career diplomat may not have had the big personality of some of those who proceeded him in the role, such as Robert Armstrong, Robin Butler and Gus O’Donnell.

But he was arguably as powerful and influential as any of them.

He advised Boris Johnson, and before him Theresa May, during the eye of the Brexit storm and throughout a turbulent twelve-month period in which neither prime minister had a majority in Parliament.

He was centre stage, albeit almost invariably behind the scenes, in some of the most controversial decisions of the past 18 months, including Boris Johnson’s unlawful suspension of Parliament and the snap general election.

Sir Mark took over as cabinet secretary in November 2018, following the death from cancer of Sir Jeremy Heyward – having filled in for him previously while he was receiving treatment.

Appointed without a formal recruitment process by Theresa May, he won the ex-PM’s trust while serving as her top civil servant in the Home Office for four years.

Prior to that, he worked in the Foreign Office for more than twenty years, latterly as Ambassador to Afghanistan and as Nato’s senior civilian representative in that war-torn country.

While advising Mrs May, he led a high-profile investigation into alleged leaks of information from the National Security Council over the Chinese technology firm Huawei, which led to the resignation of the then defence secretary Gavin Williamson.

This made him some powerful enemies on the Conservative benches, particularly among Leave supporters – some of whom blamed the civil service for frustrating the government’s strategy on Brexit.

While rarely venturing into public controversy, Sir Mark was quick to make his feelings known when he believed the neutrality and independence of the civil service was being impugned.

He came to the defence of Sir Kim Darroch aft