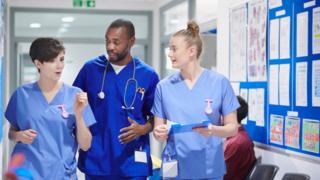 Labour says it has evidence the NHS is at risk under a post-Brexit trade deal with the US.

At a press conference in London, Labour leader Jeremy Corbyn said he had a 451-page dossier showing talks had taken place on drug pricing and access to NHS contracts.

He warned it could lead to the NHS paying more for drugs and “run-away privatisation” of health care.

The Tories have said the NHS is not at risk under a future trade deal.

In its manifesto, published at the weekend, the party explicitly stated neither the price paid for drugs or the services provided would be “on the table”.

The BBC has not yet had chance to analyse the dossier.

Idea of NHS being up for sale will be furiously disputed

This is all going to be furiously disputed throughout the day, no question.

It’s important, though, that Jeremy Corbyn doesn’t provide evidence that ministers have agreed that the health service should be part of a trade deal with US.

But details of discussions about the demands of US pharmaceutical companies will still be motivating for Labour voters worried about the NHS.

“Not for sale” has been the biggest mantra at Labour events, even though the Tories have always furiously denied that