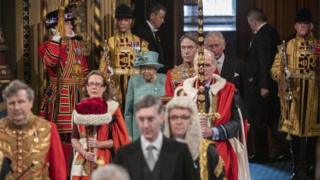 It may have been billed as a less ornate affair than usual, but even a dressed-down State Opening of Parliament is hard to mistake for a casual do.

The twinkling of the tiaras and clip-clop of horses’ hooves were gone, as the Queen swapped her traditional horse-drawn carriage for a Bentley.

But with the glittering gold throne and bejewelled crown sitting on a velvet cushion, there was still more than enough pomp to go round.

The day begins in the gentle drizzle outside Parliament, as patient police officers redirect irate commuters around the cordoned-off streets, while sleek BMWs and Jaguars with personalised number plates and national flags affixed to the bonnets transport diplomats to the building.

The foreign dignitaries pack out their small section of the House of Lords – a contrast to the ample elbow room available to peers on the rest of the red benches.

Perhaps the relatively sparse attendance is not surprising – it is, after all, only two months since the last Queen’s Speech.

On that occasion, the Queen read out the list of her government’s priorities – but it was far from clear if any of the proposed laws would be passed by such a divided Parliament.

Things are very different now. After last Thursday’s general election, the government has a healthy majority of 80 and is likely to have no trouble getting its policies into law.

Image copyright PA Media Image caption The Queen is accompanied by her son Prince Charles, who sits on an imperceptibly smaller throne

The snap general election meant less time to prepare for the ceremony and, therefore, certain elements were dropped – the Queen wore a day dress instead of sparkly court dress and tiara.

The 93-year-old monarch no longer wears the heavy, jewel-encrusted Imperial State Crown for state openings, describing it in a documentary last year as “unwieldy”.

She also arrived by car rather than horse and carriage – a sort of Cinderella in reverse.

Despite these changes, the event, which can be traced back to the 16th Century and marks the formal start of the Parliamentary year, is still governed by tradition,