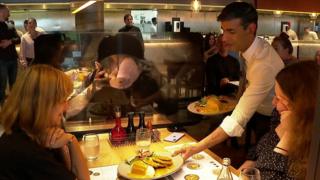 He’s been dubbed “Dishy Rishi”, “Britain’s economic Jedi” and “Santa Claus in hazmat” in recent months, but most often he is referred to as a “possible future prime minister”.

Rishi Sunak’s star has been rising steadily since he became chancellor in February. Within weeks he found himself tackling the greatest challenge to face any chancellor since the Second World War: steering the UK economy through the pandemic and the lockdown.

For quite a few people, this teetotal millennial – he had his 40th birthday during lockdown – has appeared to be a reassuringly steady hand at the tiller.

And while he lacks the rhetorical flamboyance of the current prime minister (and prefers a neat coiffure), he’s shown himself ready to push “brand Rishi”.

He has used social media to show himself in a grey sports hoodie at his computer, riding the escalators at John Lewis, and this week helping out at a Japanese restaurant, where he served food – although he attracted a wave of criticism online for standing too close to customers and not wearing a mask.

This week he pledged another £30bn for an emergency spending programme that now totals £190bn.

And while it is always easier to gain approval while you’re handing out money, he’s earned praise for his jargon-free plain-speaking and for being prepared to, in his words, “do whatever it takes” to get the economy through the crisis.

But there has been criticism too, from those who say these latest moves have been too cautious.

Some say that his policies are blunt weapons that compensate some who don’t need support and fail to help many others who do, and that the UK is storing up debt which will cast a shadow over the economy for years.

His mettle will be tested further over these issues in the months to come.

So what do we know about Rishi Sunak?

Mr Sunak’s parents came to the UK from east Africa and are both of Indian origin.

He was born in Southampton, where his father was a GP, and he says he admired his father’s dedication to serving the community. Helping his mother in her independent pharmacy gave him his first lessons in business.