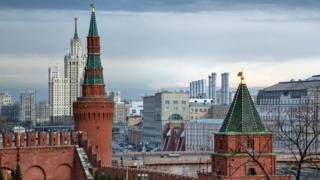 A long-awaited report into alleged Russian interference in the 2017 general election and the 2016 Brexit vote is to be published next week.

The Intelligence and Security Committee voted unanimously for it to be released before Parliament’s summer break.

The delay in publishing the report, which was completed last year, has led to speculation that it contains details embarrassing for the Conservatives.

But the government denies that political considerations were involved.

The report is thought to look at a wide range of Russian activity – from traditional espionage to subversion – but the greatest interest is in possible interference in the 2016 and 2017 votes.

Downing Street gave clearance for publication last autumn, but this was held up by December’s general election and then a delay in setting up the committee,

The ISC, which meets behind closed doors, took evidence from independent experts and MI5, MI6 and GCHQ.

What’s in the Russia report?

Espionage, subversion and influence: that’s what the Russia Report is all about. How far has Russia been carrying out such activities and has enough been done to stop them?

It is not just about the traditional spy-versus-spy intelligence-gathering to steal secrets, but also Russia’s use of new techniques like cyber-espionage and social media campaigns to interfere in political life.

But it is also about Russian influence, especially though money, which critics argue has seeped into public life and compromised various institutions.

The information in the report came from the intelligence agencies but also from independent experts. Some of them are believed to have painted a stark picture of a long-term failure to deter Moscow, all the way back to the weak response to the poisoning of Alexander Litvinenko with radioactive polonium in 2006.

How much detail is there and how damning is it? We are about to find out.

The decision by the nine-member ISC to bring out the report follows the election of Julian Lewis, a Tory MP since 1997, as its chairman on Wednesday.

He put himself forward for the role, apparently against the wishes of Downing Street, which had preferred Chris Grayling for the job.

The three Labour members and one SNP member supported Mr Lewis, who was then immediately expelled from the Conservative Parliamentary Party.