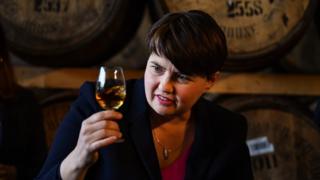 Ruth Davidson has urged Scots to “move on” from constitutional debates as she launched the Scottish Conservative campaign for the European elections.

The Tories had hoped to avoid going to the polls on 23 May, but have conceded they will take place with the Brexit deadlock at Westminster still unbroken.

The party has not produced a manifesto, but held a campaign launch event at a distillery near Stirling.

Ms Davidson spoke out against having a new vote on Brexit or on independence.

The Scottish Tory leader said the UK should “leave the European Union in an orderly manner” and move on to new debates.

Ms Davidson said a vote for her party would “respect the result of referendums”, pledging “to honour the voices of millions of people who told us Scotla