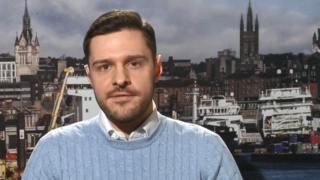 A Scottish Conservative MP has said if Theresa May’s Brexit deal comes back to parliament that he will not necessarily support it – even if the DUP do.

Ross Thomson, MP for Aberdeen South, told Sunday Politics Scotland that he will make up his own mind on the deal.

He said he had a lot of the same concerns as the Democratic Unionists.

He said the PM’s withdrawal agreement is “not the greatest” but he could “suck up” some issues if concerns on the backstop could be addressed.

Mr Thomson is one of a key group of Conservative MPs who have consistently opposed Theresa May’s deal, voting against it twice.

It is likely the prime minister will have to win over both the DUP and backbench critics such as Mr Thomson to get her deal through the House of Commons.

Mr Thomson is one of only three Scottish Conservative MPs who rejected the deal in the first vote on it in the House of Commons.

One of the others, John Lamont switched sides in the second vote last week and voted in favour. The third, Moray MP Douglas Ross, missed the second vote because he was attending the birth of his son.

Mr Thomson told Sunday Politics Scotland that the UK should be allowed to “legally and unilaterally” leave the EU, adding that he “genuinely wants” to be able to vote for a Brexit deal with the EU.

However, he would not risk the UK’s “integrity” by voting for the deal as it currently stands.

“I’m not a member of the DUP… I will make my own mind up but we do have the same concerns,” he said.

Mr Thomson added: “I simply won’t vote for something because the DUP back it but if those similar concerns are addressed round about the