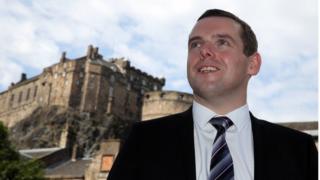 Douglas Ross is likely to be confirmed as the new Scottish Conservative leader later.

The Moray MP is currently the only candidate to put their name forward to replace Jackson Carlaw.

With nominations closing at noon, he is widely expected to win the leadership without a contest.

He then hopes to win a seat at Holyrood – but has said he has no plans to quit the House of Commons before the next general election.

He said he had come to the “painful” conclusion that he was not the right person to put the case for Scotland remaining in the UK.

And he said that a “younger and fresher voice” was needed to lead the party into May’s election, when the Conservatives will be aiming to prevent the SNP forming a pro-independence majority at Holyrood.

In an interview with BBC Scotland on Monday, Mr Ross insisted that Mr Carlaw’s sudden departure was not a “stitch-up” and did not involve anyone at Westminster.

Mr Ross is seen as a close ally of Prime Minister Boris Johnson, despite opposing Brexit in the EU referendum.

But he resigned as a Scotland Office minister in May over Dominic Cummings, the PM’s chief adviser, refusing to quit for making a trip from London to Durham during the coronavirus lockdown.

When asked if he would speak up against the UK government if they went down a road he did not agree with, Mr Ross said: “Absolutely, I think you’ve seen that very clearly to the extent I gave up a job, that I thoroughly enjoyed doing, in the Scotland Office.

“As leader of the Scottish Conservatives I will not be a member of the government and I won’t be part of collective responsibility.”