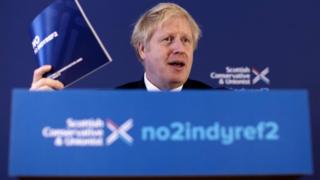 The prime minister will give “careful consideration” to Nicola Sturgeon’s request to be handed the powers to hold a second independence referendum, the Scottish secretary has insisted.

Alister Jack said the UK government would formally reply to the first minister’s request in the new year.

But he said 55% of Scottish voters had backed parties that are opposed to independence in last week’s election.

Ms Sturgeon says she wants to hold a referendum next year.

She wants the UK government to agree to a so-called section 30 order, which would give the Scottish Parliament the power to hold a referendum and put its legality beyond doubt – as happened ahead of the 2014 referendum when Scotland voted to remain in the UK by 55% to 45%.

Ms Sturgeon sent documents to Prime Minister Boris Johnson on Thursday outlining her case for indyref2, arguing that she now has an “unarguable” mandate after her SNP won 48 of Scotland’s 59 seats in last week’s general election.

She has warned Mr Johnson that a “flat no” to her request – which is widely expected to be his response – will not be the end of the matter, and has predicted that the prime minister will eventually have no choice but to agree to her request.

But she has also ruled out holding an unofficial referendum similar to the one in Catalonia two years ago, arguing that it would not lead to independence.

In her letter to the prime minister, Ms Sturgeon said he had a “duty” to respond in a “considered and reasonable manner”, adding: “I therefore look forward to discussing matters further with you in the new year.”

Speaking to the BBC’s Good Morning Scotland programme on Friday, Mr Jack said the prime minister would not mark Ms Sturgeon’s letter with “return to sender” – as he has previously pledged he would.

He added: “He has received a letter and he is going to give it careful consideration, and will reply in the new year.

“The result of the general election was that 55% of the votes cast were cast for parties that backed the union – 45% were for separatist parties and that’s no different to what happened five years ago,