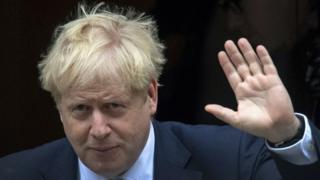 Three Scottish judges are due to announce later whether a court can sign a Brexit extension letter on behalf of the government.

The Inner House of the Court of Session, Scotland’s highest court, is being asked to act directly if Boris Johnson refuses to request a delay.

The letter is a key provision of what is known as the Benn Act, by which MPs hope to prevent a no-deal Brexit.

Lord Carloway said the judges will give their decision at 11:00 BST.

The court also heard an appeal against a ruling that Mr Johnson can be trusted to apply the law.

Abide by the law

Lord Pentland said following an earlier hearing that there could be “no doubt” that the prime minister had agreed to abide by the law.

As a result, he said there was no need for “coercive orders” against the UK government or against the prime minister.

They want the court to use its “nobile officium” power to, in effect, sign a letter to European leaders on behalf of Mr Johnson if the prime minister refuses to do so himself.

What is the nobile officium?

The procedure of petitioning the nobile officium is unique to Scots law, but is far from being a forgotten backwater of the legal system.

Its name is a Latin term meaning the “noble office”.

The procedure offers the opportunity to pr