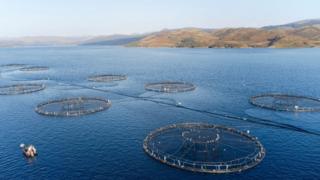 The chief executive of the Scottish Salmon Producers Organisation (SSPO) said firms were being told to prepare for trade barriers with the EU.

The industry is also warning that added red tape could see £9m on costs and delays to the departure of fresh fish.

The UK government said it would inform producers later this year on the measures they needed to take.

SSPO chief executive Julie Hesketh-Laird said planned changes would require salmon farmers to have an export health certificate for every consignment, signed by a vet or health official.

She warned that could mean up to 100,000 certificates a year, with the cost estimated at up to £9m annually, depending on the fees set by councils.

Producers said that such a process would delay the departure of fresh fish, in addition to expected delays at Channel ports.

Ms Hesketh-Laird said producers were also concerned that the long-term relationship with Europe could see a 2% tariff on fresh fish rising to 13% for smoked salmon.

That would put Scottish salmon exports at a disadvantage, creating an opportunity for Irish, Norwegian, Faroese and Canadian exporters to gain market share.

Firms are also concerned that salmon exports could become entangled in the looming battle over access to fish stocks in UK waters after the end of this year.

Salmon farming plays no part in the Common Fisheries Policy, but exports could be penalised by the EU if its boats do not retain a large share of the catch quotas in UK waters.

It comes as salmon exporters into China, where customers buy premium large fish, are already seeing a downturn in trade due to the coronavirus.

The most recent figures, for 2018, show nearly 39,000 tonnes of Scottish salmon was sold to other EU nations.

Global export value topped £500m, with half of that sales to the European Union.

In the first half of last year, exports rose by 25% on the start of 2018. That made Scottish salmon the biggest of Britain’s food exports. The full year figures for 2019 are expected soon.

Salmon does not currently requir