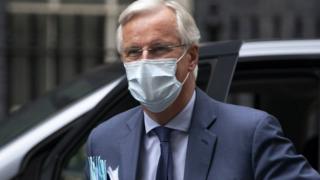 “Significant divergences” remain between the EU and the UK on a post-Brexit trade deal after informal talks in London, Michel Barnier has said.

The EU’s chief negotiator said his team would “continue working with patience, respect and determination” following talks with his counterpart David Frost.

But he said “regardless of the outcome” there would be “inevitable changes” from 1 January 2021.

The UK has ruled out extending the December deadline to reach a deal.

Both sides agreed to “intensify” negotiations last month and held the first face-to-face talks since the coronavirus pandemic at the beginning of July.

If they are unable to reach a deal by the end of the transition period at the end of the year, the UK will leave the EU’s single market and the customs union without any agreement on future access.

This week’s discussions confirm that significant divergences remain between 🇪🇺 & 🇬🇧. We will continue working with patience, respect & determination.

Regardless of the outcome, there will be inevitable changes on 1/1/21. Read more here 👇https://t.co/CzbGX7VGQY

On Wednesday, Mr Barnier said the discussions had been “useful” and the team was “negotiating in good faith”.

He said they were “working hard for a fair agreement” with the UK, including on fisheries and the “level playing field” arrangements designed to prevent the UK undercutting the EU by lowering standards and increasing state subsidies.

The two sides have been deadlocked over the issue of fishing rights – an area where they had previously pledged to find agreement by last month.

The EU wants to uphold its existing access to British waters for vessels from member states, to avoid economic disruption for their fishermen.

But the UK wants to hold annual talks with the bloc over access to its waters, as it currently does with nations such as Norway.

European Commission spokesman Daniel Farrie told reporters they were “working hard to overcome the significant divergences that remain between us”.