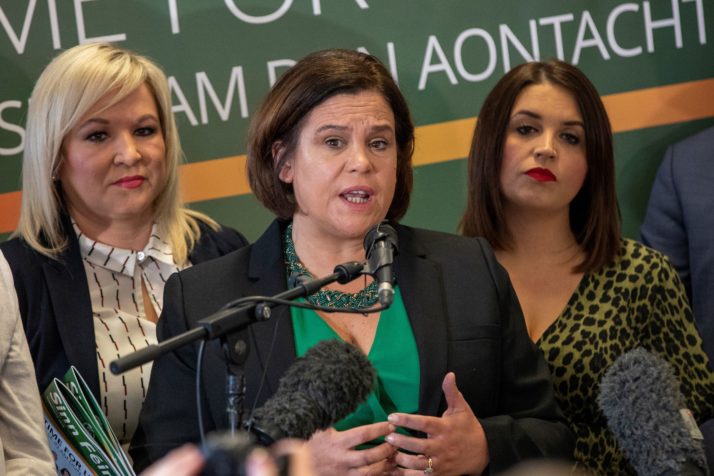 Sinn Féin: US intervention was a ‘game-changer’ in Brexit negotiations

DERRY/LONDONDERRY, Northern Ireland — The intervention of U.S. politicians like House of Representatives Speaker Nancy Pelosi was a “game-changer” in Brexit negotiations, the president of pan-Irish party Sinn Féin said today.

Launching the party’s election manifesto in Londonderry, known by the nationalist community as Derry, Mary Lou McDonald defended the party’s decision not to take up its seats in Westminster.

She insisted political representation is also having a voice on Capitol Hill in Washington, in Brussels, and the Dáil (Irish parliament) in Dublin.

“Westminster is the place where the British state figures out its position on Brexit. Irish interests do not feature in that conversation,” McDonald said. Sinn Féin is active in both Northern Ireland and the Republic of Ireland.

Irish interests had been defended through the Irish government and the EU27, who sit on the other side of the negotiating table, she said, insisting they have “allies like never before across the EU27 and beyond.”

“The biggest game-changer actually in the whole Brexit conversation didn’t happen on this island or our neighboring island, it happened in the United States, it happened when Nancy Pelosi said: ‘Listen up, folks, there’s no trade deal if you mess with Ireland or if the Good Friday Agreement is undermined,”