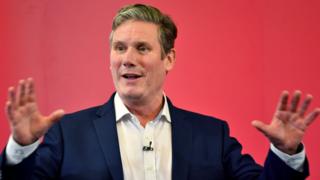 Sir Keir Starmer is the first Labour leadership candidate to pass the final hurdle to get onto the ballot.

The Union of Shop, Distributive and Allied Workers (Usdaw) says it is backing the shadow Brexit secretary.

This gives Sir Keir the support required – that of three unions and affiliate groups representing 5% of the membership – to get to the final stage.

Usdaw has also given its support to shadow education secretary Angela Rayner for deputy leader.

The union’s general secretary, Paddy Lillis, said: “The Labour Party must be led by someone who can persuade voters that they have what it takes to be a prime minister and we are a government-in-waiting.”

But they have yet to receive the backing of the necessary groups, or the alternative – the backing of 5% of constituency Labour parties (CLPs) – to make the final ballot.

Sir Keir, who also has the support of Unison and affiliate group Sera, said he was “honoured” to have the backing of Usdaw.

He added: “If I’m elected leader, Labour will stand shoulder to shoulder with the trade union movement as we take on the Tories and rebuild trust with working people.”

Ms Rayner also thanked the union for its backing, saying: “It’s a great honour to be nominated by such a campaigning trade union.”

The unions, affiliate groups and CLPs have until 14 February to get their preferences submitted. The GMB union is expected to announce which candidate it will support on Tuesday after a hustings and meeting.

Earlier on Monday, the deadline passed for new members to join the party – or an affiliated group – in time to vote in the leadership election.

The final ballot of party members, trade unionists and registered supporters will open on 21 February, and the new leader and deputy will be announced on 4 April.