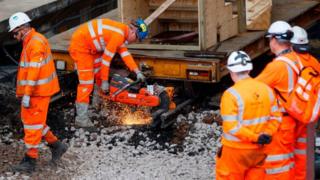 The chancellor has pledged to spend a £26.6bn Brexit war chest to boost the economy, if MPs vote to leave the European Union with a deal.

Philip Hammond vowed to free up more money to help end austerity in a “deal dividend”.

However, he said tax cuts and spending rises depended on a smooth Brexit.

Mr Hammond used his Spring Statement to warn that a disorderly Brexit would deal a “significant” blow to economic activity in the short term.

He said the decision by MPs to reject Theresa May’s Brexit deal for a second time had left a “cloud of uncertainty hanging over our economy”.

The latest figures from the Office for Budget Responsibility (OBR) forecast that the UK economy will grow at the slowest pace since the financial crisis this year.

That is a significant cut from the 1.6% expansion predicted by the government’s economic watchdog last October.

After that growth is expected to rebound.

Mr Hammond said the economy had “defied expectations” as wages were expected to keep growing at rates of above 3% over the next five years.

He hinted that the government would have up to an extra £26.6 billion to spend if MPs voted to leave the EU with a deal, while still meeting self-imposed limits on government borrowing.

This is almost double the £15.4bn estimated by the OBR in October.

The statement left the forecast for GDP growth in 2020 at 1.4% and now expects the UK economy to expand by 1.6% a year in the following three years.

The government is expected to borrow £22.8bn this financial year to plug the gap between the money it spends on public services and the tax revenues it collects.

This is almost £3 billion lower than the £25.5bn predicted by the OBR in the October Budget.

The watchdog expects the improvement in the public finances to continue in future years, helped by stronger tax receipts and lower spending on debt interest.

While borrowing is expected to rise to £29.3bn next year, it is then predicted to fall over the next four years.

In January the government announced it would pump a similar amount into the NHS to maintain real-terms spending.

The chancellor also said he was making an additional £100m available over the course of the next year to help deal with the surge in knife crime.