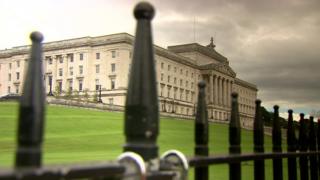 Image caption NI has been without a devolved government since January 2017, when the DUP and Sinn Féin split in a bitter row

It’s more than a month since the British and Irish governments began fresh efforts to restore devolution in Northern Ireland.

Breaking two and a half years of political deadlock between diametrically opposed parties is no easy task.

Add to that the out-workings of Brexit, a new prime minister – plus the findings of an inquiry into the financial scandal that collapsed Stormont in the first place – and restoring the place seems an insurmountable task.

Talks are ongoing – but where are things at right now?

The latest round of Stormont talks was announced following the murder of journalist Lyra McKee by the New IRA.

The British and Irish governments had always planned to hold fresh negotiations – but the death of Ms McKee became a catalyst to do so.

Over the past six weeks, party leaders have been meeting at Stormont on a regular basis and five working groups were set up to deal with specific talks issues.

There is no set deadline.

At the end of May, the two governments agreed to “intensify” the negotiations – but at the moment it doesn’t look like the parties are nearing an agreement.

What is being discussed?

Without a doubt, the main sticking point is the call for an Irish language act.

It is being addressed through a working group on language and identity.

Sinn Féin has led the charge for that, previously saying it would not go back into government without a stand-alone Irish language act.

The DUP has been vehemently opposed to this, with party leader Arlene Foster saying the discussions could not lead to an outcome that was “five-nil to Sinn Féin”.

Journalist Brian Rowan revealed on the Eamonn Mallie website that working documents from the talks are trying to focus on the content of future language legislation, rather than getting hung up on what any law should be called.

Other working groups are addressing issues such as reforming the petition of concern veto mechanism and improving the sustainability of the institutions.