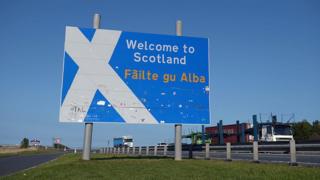 Nicola Sturgeon has called for powers to be devolved to Holyrood to set up a “Scottish visa” system designed to help boost immigration.

However powers over immigration are currently reserved to Westminster.

The UK government has set out some of its plans for post-Brexit migration policy, promising fast-track entry for leading scientists and researchers.

Freedom of movement between the UK and the EU is expected to end after the Brexit transition period on 31 December, with UK ministers aiming to introduce a new points-based system thereafter.

The Scottish government has long campaigned for immigration powers to be held at Holyrood, with the SNP’s manifesto for December’s general election calling for a “tailored migration system” to respond to local demographic needs.

There are concerns about Scotland’s ageing population and shrinking workforce, with the National Records of Scotland projecting that deaths could outweigh births over the next 25 years.

Scottish ministers say this means greater inward migration is needed to boost Scotland’s working-age population in particular, and that an end to freedom of movement could threaten this.

However the UK government has always resisted the idea of devolving control over immigration, saying its plans will “work in the interests of the whole United Kingdom, including Scotland”.

And the Migration Advisory Committee has said Scotland’s needs are “not sufficiently different” from the rest of the UK to justify a “very different” system, with the north of England facing similar issues.

At present there are a number of different routes to securing a visa to enter the UK, ranging from schemes for skilled workers, students and investors to people with family already resident and those of “exceptional talent”.

The system proposed by Ms Sturgeon would add a Scottish-specific visa, controlled from Holyrood, which new migrants could choose to apply for instead of one of the existing routes.

MSPs would decide the criteria for this new visa, and the Scottish government would receive and assess applications before sending them to the UK government for security checks.

Those applying for such a visa would need to remain resident in Scotland and pay tax locally, but would have a route to permanent settlement – unlike existing schemes for unskilled or temporary workers.

Ms Sturgeon said: “Migration is an issue which is crucial for our future,