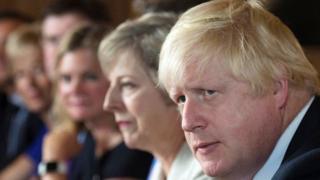 Theresa May wanted to keep Brexit negotiations “out of the hands” of Boris Johnson, a former cabinet minster has claimed.

Jeremy Hunt said Mrs May made a “deliberate decision” to sideline the then Foreign Secretary Mr Johnson.

Talks were instead entrusted to the new Department for Exiting the European Union (DExEU).

The decision to found the department was branded a “mistake” by Mr Hunt’s cabinet colleague David Lidington.

The comments, made by Mr Hunt and Mr Lidington in interviews with the Institute for Government (IfG) think tank, hint at Theresa May’s thinking in the crucial months after the UK voted to leave the EU.

“When I became foreign secretary, we got a bit more involved.”

On becoming prime minister, Mrs May founded DExEU and handed over responsibility for negotiations to the new secretary of state, David Davis.

Both Mr Davis and Mr Johnson resigned from Mrs May’s cabinet in July 2018 after she presented them with her so-called ‘Chequers plan’ to keep the UK closely aligned to EU goods regulations.

Image copyright Reuters Image caption David Lidington served as Chancellor of the Duchy of Lancaster, and was previously a Europe minister
‘A mistake’

Speaking to the IfG, the former de-facto deputy prime minister David Lidington said: “I think that, as is now recognised, it was a mistake to create DExEU as a separate department.

“The fact that you had then DExEU try to do things and Number 10 and the Cabinet Office trying to do things as well…trying to knit that together just took more energy and time and resource than should have been necessary.

“In my ideal world, I would not have invented DExEU as a department. I would have had a big unit, but I would have located it as an annex to the Cabinet Office and Number 10, because the prime minister was going to be driving the negotiations.”

Having failed to pass her Brexit deal on three occasions and facing significant opposition from within her party, Mrs May invited opposition ministers to talks to try to find a compromise solution that would have broad support.