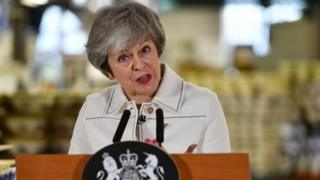 Two men have been arrested after a media pass for the prime minister’s visit to a pottery factory was stolen.

Theresa May was at the Portmeirion pottery plant in London Road, Stoke-on-Trent, earlier on Monday to deliver a speech about Brexit.

The men, aged 46 and 58 and both from the city, were arrested on suspicion of burglary on Monday morning, Staffordshire Police said.

They remain in custody for questioning.

A spokesman for the force would not give any further details about the arrests.

Mrs May was in Stoke to rally support behind her draft withdrawal agreement, ahead of Tuesday’s crunch vote.