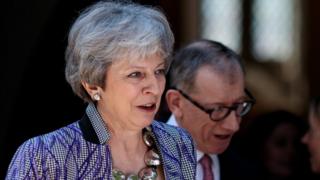 Prime Minister Theresa May is to face an unprecedented no-confidence challenge – from Conservative grassroots campaigners.

More than 70 local association chiefs – angry at her handling of Brexit – have called for an extraordinary general meeting to discuss her leadership.

A non-binding vote will be held at that National Conservative Convention EGM.

Dinah Glover, chairwoman of the London East Area Conservatives, said there was “despair in the party”.

She told the BBC: “I’m afraid the prime minister is conducting negotiations in such a way that the party does not approve.”

The Conservative Party’s 800 highest-ranking officers, including those chairing the local associations, will take part in the vote.

Mrs May survived a vote of confidence of her MPs in December – although 117 Conservatives voted against her.

However, an EGM has to convene if more than 65 local associations demand one via a petition.

The current petition, which has passed the s