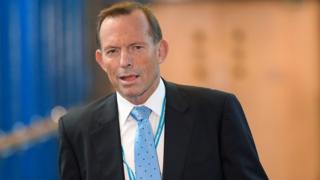 Tony Abbott has said he is looking forward to contributing his “expertise” in global commerce to his new role as a trade adviser to the UK government.

The former Australian PM was appointed to the unpaid role on Friday, despite criticism over his past comments on women, LGBT people and climate change.

Mr Abbott, who led Australia from 2013-15, posted on Twitter that he was “only too keen” to help the UK.

But Labour said he should have been disqualified from the role.

Mr Abbott will advise the new Board of Trade, set up to help ministers and encourage firms to do more business internationally, but will not be involved in post-Brexit talks between the UK and other countries.

His appointment has drawn criticism from opposition parties and equality activists, including Sir Ian McKellen and Doctor Who writer Russell T Davies, who said his past comments meant he was not “fit” for the role.

The former Australian PM opposed same-sex marriage in Australia’s 2017 referendum and has been accused of making homophobic and misogynistic comments in the past.

He has also described the idea of climate change as “faddish”, and last year claimed the world was “in the grip of a climate cult”.

Prime Minister Boris Johnson said he did “not agree with those sentiments”, but rejected suggestions he was unsuitable for the role.

In a statement on Twitter, Mr Abbott said: “A UK-Australia trade deal, maximising the movement of goods, services and people is clearly in the best interests of both our countries.

“It’s important for the wider world that Britain make the most of its post-Brexit opportunities and I am proud to be playing a part.

“My government finalised trade deals between Australia and China, Japan and Korea. I’m looking forward to bringing that expertise to bear as Britain works towards mutually-beneficial improvements with its major trading partners.”

She said: “First is his history of offensive statements towards women, LGBT people, minority groups – the list is so long and so despicable that I think it speaks to his character and his values, and I don’t think that’s a character we should have representing Britain around the world.