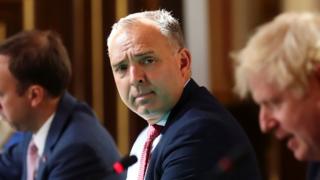 Anonymous briefings against civil servants have had a “demoralising” effect on the service, the UK’s top civil servant has said.

Cabinet Secretary Sir Mark Sedwill, who is standing down in September, said “sniping” against officials had risen in recent years.

Sir Mark also said a “decade of pay restraint” had made it harder for the civil service to retain expertise.

He added the size of the cabinet should be cut to improve decision-making.

Speaking at Oxford University’s Blavatnik School of Government, Sir Mark said the current number of ministers had made it a “cumbersome forum” for debate.

He said smaller groups below cabinet level, such as a special committee for no-deal Brexit preparations, were where “big issues are thrashed out”.

Sir Mark acknowledged civil servants were “not the only victims” of anonymous briefings, which had also sometimes been directed at politicians.

But he added they had become “damaging to the process of governance”.

“There’s nothing more destabilising for a senior cabinet minister to read a whole load of stuff in one of the newspapers about whether or not the skids are under them because of something that’s happened,” he said.

Sir Mark, who took up his post after Sir Jeremy Heywood’s death in November 2018, is also standing down as UK national security adviser.

His exit, announced in June, followed reports of tensions between him and senior members of Boris Johnson’s team.

But he said anonymous briefings should not necessarily be linked with a number of announced departures from the civil service in recent months.

Sir Simon McDonald will leave the Foreign Office in September when it merges with the Department for International Development.