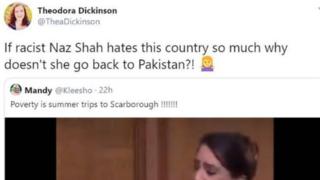 A Conservative activist has been suspended after tweeting a British Muslim MP should “go back to Pakistan”.

The party said they were investigating the comments made by Theodora Dickinson on Twitter about Labour’s Naz Shah.

Responding to a GIF of the MP talking about her experience of poverty while growing up in Yorkshire, she wrote if Ms Shah “hates this country so much why doesn’t she go back to Pakistan”.

The Muslim Council of Britain said such “blatant racism” was unacceptable.

The group – which has previously accused the Conservatives of turning a blind eye to Islamophobia – said it showed there was still a “serious problem” within the party.

Former party chair Baroness Warsi has also suggested the Conservatives are in denial about the extent of Islamophobia within its ranks.

The Conservatives have launched an inquiry into all forms of prejudice within the party.

But critics have said it is not independent and would not specifically address anti-Muslim racism.

Ms Dickinson posted the tweet in response to a clip from a speech the MP made in a Commons debate on free school meals.

Ms Shah accused ministers of having “no real understanding, care or emotion” about the extent of child poverty in the UK.

In the clip, the Labour politician – who was born in Bradford and now represents the city – spoke of her experience, being “palmed off” to social services when she was a child, separated from her family and taken on trips to Scarborough, adding “that is what poverty is”.

Ms Dickinson’s comments, which were first reported by the Huffington Post, have since been deleted.

On her Twitter handle, Ms Dickinson describes herself as a political communications and social media consultant. She is understood to have worked for the Vote Leave campaign during the 2016 Brexit referendum.