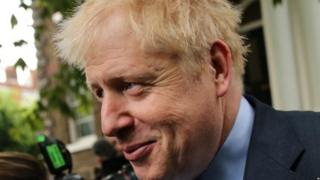 Boris Johnson has warned any further delay to Brexit will spell disaster for the Conservatives ahead of the launch of his leadership campaign.

He will tell supporters the UK must leave on 31 October and that any more “can kicking” will mean defeat for the party at the next general election.

He will say his two election victories as London mayor mark him out as the person most able to beat Jeremy Corbyn.

Home Secretary Sajid Javid will also make his pitch to MPs on Wednesday.

In a campaign video released on Tuesday, Mr Javid said he would bring a “fresh look” to the Conservative Party and was capable of healing the divisions caused by Brexit.

Mr Javid has won the coveted backing of Scottish Conservative leader Ruth Davidson, who will introduce him at Wednesday’s event.

The two men are the last of the 10 candidates in the contest to officially launch their campaigns ahead of Thursday’s first ballot of Tory MPs.

Mr Johnson is regarded as the frontrunner in the contest, with many more endorsements from Tory MPs than any other candidate.

Who will replace Theresa May?

The winner of the contest to lead the Conservative Party will become the next prime minister.

Foreign Office minister Andrew Murrison and veteran Eurosceptic Sir Bill Cash are the latest to pledge their support on Tuesday.

Mr Johnson has kept a low profile in the race to succeed Theresa May so far, his only significant intervention being a pledge – immediately criticised by his rivals – to cut income tax bills for people earning more than £50,000 a year.

At Wednesday’s launch, the former foreign secretary – who quit over Theresa May’s Brexit policy last summer – will suggest that he would take the UK out of the EU by the revised deadline of 31 October, come what may.

“After three years and two missed deadlines, we must leave the EU on October 31.

“We simply will not get a result if we give the slightest hint that we want to go on kicking the can down the road with yet more delay.

“With every week and month that goes by in which we fail to deliver on our promise I am afraid we will further alienate not just our natural supporters but anyone who believes that politicians should deliver on their promises.”