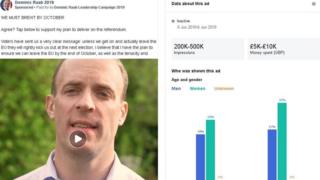 Conservative leadership hopeful Dominic Raab has spent more than £50,000 on Facebook ads in the last week – far more than any other candidate.

A BBC analysis of Facebook data shows most of Mr Raab’s ads have been seen by people over the age of 55.

These figures suggest this group has been specifically targeted by the Raab campaign.

More than half of Conservative members – who will choose the next leader – are in this age bracket.

How much has Dominic Raab spent?

Mr Raab’s official campaign page has spent more than £56,000 on Facebook adverts since it was created a fortnight ago.

Rival Boris Johnson has spent more than £4,000 on ads over the past week, while Sajid Javid’s campaign has spent a few hundred pounds.

These figures can be seen in Facebook’s online “ad archive” which the social media giant introduced last year for political content.

Facebook ads can be targeted at different demographic groups, for example by age, gender, or at people who have a particular interest.

But, although the ad archive shows which demographic groups have been reached by an ad, it does not make the actual targeting criteria public – a move that has been criticized by researchers.

All of Mr Raab’s ads contain a campaign video and a similar message: Back Raab to ensure Brexit is delivered by October.

Digging deeper into the data on individual ads shows which demographic groups have seen these posts.

The ad archive data shows that almost all of the views on this particular post were by people over the age of 55.

Some other Dominic Raab ads have a more diverse age pattern, but there is a clear trend – older people have seen them far more than younger people.

A spokesperson for the Raab campaign said: “We spent money on online advertising so that we could tell as many people as possible about Dominic’s plans to build a fairer Britain.

“We aimed to reach as many people as possible and we asked them to help us make the case that we need to leave the EU by 31 October at the latest.”