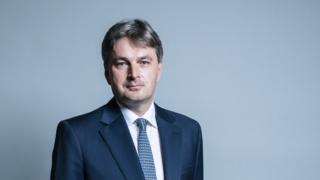 A Tory MP has quit the Eurosceptic European Research Group, claiming a “hardcore element of ‘Unicorn’ dreamers” were “endangering Brexit”.

The Shropshire MP accused the backbench Conservative group of preventing the deal from passing in the Commons.

But the ERG’s deputy chairman stood by their opposition to the PM’s deal.

Mark Francois told BBC Newsnight: “The withdrawal agreement keeps us in the European Union, that’s why we’ve always been so against it.” 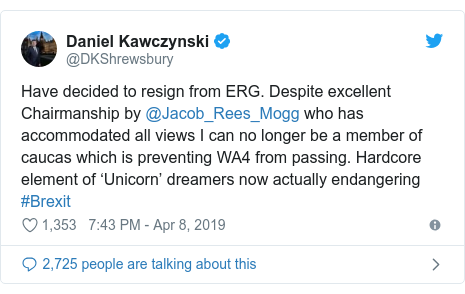 The ERG was founded in the early 1990s in opposition to former PM John Major’s signing of the EU’s Maastricht Treaty.

It has no official role in Parliament or within the Conservative Party, but it is seen as influential.

The group has led the criticism of the deal Mrs May negotiated with the EU and played a key part in it being voted down in the Commons.

Mr Kawczynski told BBC Radio 4’s Today programme he thought the ERG was “part of the problem in actually getting the withdrawal agreement across the finishing line”.

He said he was worried this could “lead to possibly no Brexit at all”.

And he opposed a call from Mr Francois for Tory MPs to have an informal vote to show they had lost faith in Mrs May.

Under Tory party rules, another formal leadership challenge against Mrs May cannot take place until December, after she won a vote of confidence at the end of last year.

“I do disagree with Mark Francois on that,” he said. “I don’t think the time has come for another leadership contest. I think we have to abide by the rules our party has set.”

Responding to Mr Kawczynski’s comments, Mr Francois said members of the group had been “called everything under the sun” by opponents during the Brexit process.

“Being called unicorns really is water off a duck’s back”, he added.