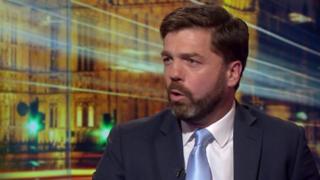 A Welsh Conservative MP said it felt like his email inbox exploded after reports the prime minister’s senior adviser had driven hundreds of miles during lockdown.

Stephen Crabb said he received “about 700 emails” about the issue from constituents.

He had driven 260 miles from London to his parents’ farm in Durham with his child and ill wife.

Mr Crabb said he had been confronted by a member of the public when he travelled from his constituency back to Westminster after recess, who accused him of having “as much regard for the rules as that Dominic Cummings”.

But the MP for Preseli Pembrokeshire said the response from constituents was nothing compared to correspondence on Brexit.

Mr Crabb has said Mr Cummings was “wrong to arrogantly brush away the allegations when they first appeared”, and previously said he would have preferred a proper inquiry.

“We had about 700 emails about this issue from constituents and that is a large number,” he told BBC Wales.

Mr Crabb said: “It felt like the email inbox was exploding at one point with lots of very concerned and angry emails.

“There were a lot of people who were pensioners talking about their own experiences of being grandparents not being able to see their wider family over the last few months.

“That sense of fair play – it’s not fair that someone else can get to travel outside the rules and maybe have a day trip with their family when so many other people have been doing their very best to stick to the rules, and that’s meant a lot of sacrifices on their part.”

He added, however, that these emails were “nothing” compared to the “thousands” of emails he received from both Remainers and Brexiteers about Brexit “twelve months ago”, and said he was encouraged people were “wanting to get in touch wit