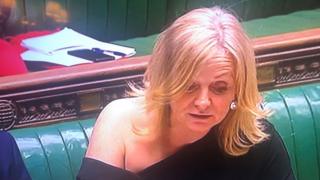 A Labour MP whose bared shoulder prompted criticism on social media has said she is not “a tart”.

The tongue-in-cheek reply from Tracy Brabin, the shadow culture secretary, came after online abuse of her appearance in Parliament on Monday.

An initial tweet questioned if her outfit was “appropriate attire” for Parliament.

Ms Brabin said she was surprised people “could get so emotional over a shoulder”.

The Batley and Spen MP had been raising a point of order in the House of Commons, about journalists being asked to leave a Downing Street press briefing on the next stage of Brexit talks, when her shoulder appeared.

Ms Brabin told the BBC the response was “sadly” routine and “another example of the every day sexism women face”.

She said she always tried to look smart but her slightly off-the-shoulder dress had slipped a little as she had leant forward to speak.

On the online comments, she said: “They were playing top trumps on how rude they could be.

“They are idiots and they are rude but I am not going to lose much sleep over them.”

Ms Brabin, who was elected to replace the murdered MP Jo Cox in 2016, said it was important to speak out about issues like this for other women who did not have a voice to protest when they were denigrated for their appearance.

“It’s important I don’t let other women down,” she said.

MPs do not have an official dress code, although they are advised to wear “usual” business dress.

Male MPs were told in 2017 they did not need to wear ties in the chamber by the then Speaker, John Bercow.