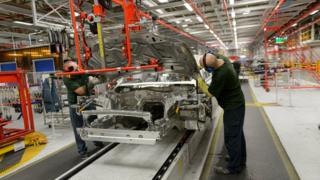 Talks between the UK and the US on a post-Brexit trade agreement are to get under way on Tuesday.

The early negotiations will take place by videoconference, due to the Covid-19 pandemic, with the first round of talks expected to last two weeks and further sessions approximately every six weeks.

Ministers say they will drive a “hard bargain” as they seek to lower tariffs on exports and boost trade in services.

But Labour warn food standards and workers’ rights could be “sacrificed”.

Although US President Donald Trump has said he hopes to negotiate a quick deal, international trade agreements typically take many years to complete.

The UK government has estimated that eliminating tariffs and reducing other trade barriers with the US could boost the economy by between 0.07% and 0.16% over the next five years, depending on the exact terms.

But critics of Brexit say improved terms with the US cannot compensate for a more economically distant relationship with the EU, with whom the UK is negotiating a new trading relationship after its exit on 31 January.

Ahead of the start of the US talks, International Trade Secretary Liz Truss said the goal was to open up new markets for UK businesses, bring in increased investment and create new jobs across the whole of the country.

“Increasing transatlantic trade can help our economies bounce back from the economic challenge posed by coronavirus,” she said.

“As we sit down at the negotiating table, be assured that we will drive a hard bargain to secure a deal that benefits individuals and businesses in every region and nation of the UK.”

Each side will have about 100 negotiators working on their teams. The UK delegation is being led by Oliver Griffiths, a senior official at the Department of International Trade.

The first round of discussions, which have been delayed for several weeks due to the coronavirus outbreak, will cover trade in goods and services, digital trade, two-way investment and support for small and medium-sized businesses.

Asked how long the overall process would take, Downing Street said both sides wanted to make progress as quickly as possible.

In an 180-page document setting out the UK’s objectives in March,