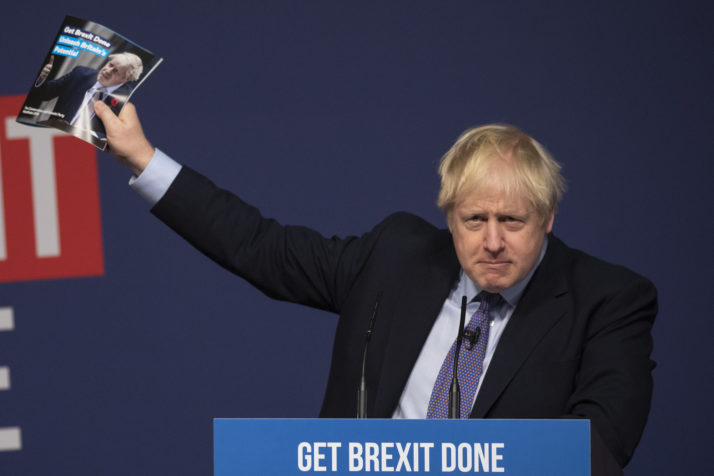 Prime Minister Boris Johnson delivers a speech at the launch of his party's manifesto at Telford International Centre on November 24, 2019 in Telford, England | Dan Kitwood/Getty Images

A Tory-led government would focus on delivering Brexit, improving the NHS and addressing the cost of living, Boris Johnson said.

By Eleni Courea and Cristina Gallardo

LONDON — Boris Johnson launched the Conservative party manifesto on Sunday with headline pledges to deliver Brexit by January 31 and spend £100 billion on the U.K.’s infrastructure.

The party has put its promise of a speedy resolution to Brexit at the heart of its campaign ahead of the U.K.’s December 12 election. Elsewhere, the 59-page manifesto document prioritizes spending on health, education, policing and infrastructure. According to the accompanying costings document, annual current spending under the Conservatives would rise by £3 billion by 2024, compared with more than £80 billion for Labour.

Johnson has avoided several of the policy controversies that tripped up his predecessor, Theresa May, during the last election; his manifesto makes no mention of a plan to reform care for sick and disabled people and pledges not to change the law on fox-hunting, both of which caused headaches for the party in 2017.

At its launch in Telford in the West Midlands, Johnson said delivering Brexit was about honoring the “democratic processes of this country.”

“We want to focus on the priorities of the British people, above all the NHS and the cost of living,” he said.