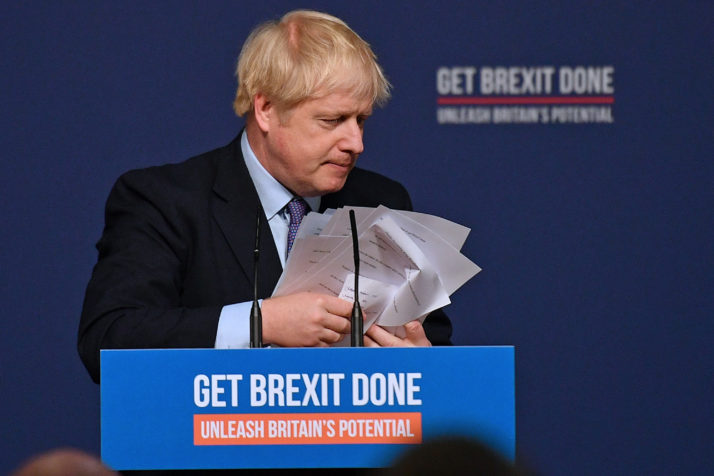 Tories rule out any extension of Brexit transition period past December 2020.

Boris Johnson launched the British Conservative party’s manifesto Sunday with a promise to put his Brexit deal to parliament by Christmas.

The party has made its pledge to “get Brexit done” front and center of its election pitch ahead of the ballot next month, while laying out plans to increase spending on health, policing and education.

At a party event to announce the manifesto, Johnson said he would “end the acrimony and the chaos” over Brexit, while Labour leader Jeremy Corbyn threatens to rip up the current deal, negotiate a new one within three months and put it to a referendum.

“We don’t even know if anybody believes in Mr. Corbyn’s new deal apart from Mr. Corbyn,” the prime minister said in a speech. “I don’t want to waste 2020 in two more referendums.”

“If we’re lucky enough to be returned with a working majority on December 13, we have this deal ready to go; it is ‘just add water,’” Johnson said. “We can then get the whole thing completed in a matter of days if not weeks, and we’re out by January 31.”