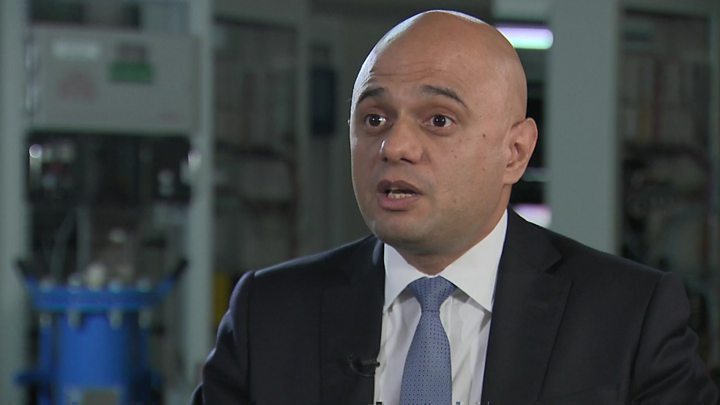 The chancellor has told the BBC that he does not expect the UK to slide into recession after data showed the economy shrank by 0.2% between April and June.

Sajid Javid was speaking after the Office for National Statistics said the economy had contracted for the first time since 2012.

The surprise decline came after Brexit stockpiles were unwound and the car industry implemented shutdowns.

The pound slipped when the data was released, raising fears of a recession.

A recession occurs when the economy contracts in two consecutive quarters. This is the first contraction since the fourth quarter of 2012.

Economists had not been forecasting a contraction in the economy in the second quarter, but had expected it to stagnate, with the consensus forecast for 0% growth.

Why is the economy shrinking?

The economy had shown 0.5% growth in the first quarter after manufacturers’ stockpiling ahead of Brexit helped to boost output, when the manufacturing sector recorded its biggest quarter rise since the 1980s.

The ONS said GDP had been “particularly volatile” so far this year because of the changes to activity sparked by the original Brexit date of 29 March.

The statistics body said its latest figures showed that those increased stockpiles had been partly run down in the second quarter and that a number of car manufacturers had brought forward their annual shutdowns to April as part of contingency planning, which also hit growth.

Mr Kent-Smith said: “Manufacturing output fell back after a strong start to the year, with production brought forward ahead of the UK’s original departure date from the EU.”

He added that “the often-dominant service sector delivered virtually no growth at all”.

What is the chancellor saying?

The Bank said earlier this month it expects the economy to grow by 1.3% this year, down from a previous projection of 1.5% in May.

Asked about the impact of Brexit, he said: “We saw some significant stockpiling by British businesses in anticipation of the Brexit that never was,