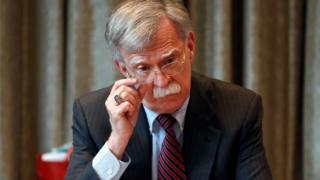 The UK is “first in line” for a trade deal with the US, President Trump’s National Security Adviser has said.

John Bolton said the US supported a no-deal Brexit and added that Washington would propose an accelerated series of trade deals.

According to Mr Bolton, deals could be done on a “sector-by-sector” basis, with an agreement on manufacturing being agreed first.

His comments came after meeting Prime Minister Boris Johnson at No 10.

According to Mr Bolton, a bilateral agreement or “series of agreements” could be carved out “very quickly, very straight-forwardly”.

While saying that “both President Trump and I were leavers before there were leavers”, he added that a trade deal for financial services and agriculture would not be the first to be agreed.

Mr Bolton said “doing it in pieces” is not unprecedented and the US understood the importance and urgency of “doing as much as we can agree on as rapidly as possible because of the impending 31 October exit date”.

He argued that there would be enthusiastic bipartisan support in Congress for speedy ratification at each stage.

“To be clear, in the Trump administration, Britain’s constantly at the front of the trade queue, or line as we say,” said Mr Bolton.

“We want to move very quickly. We wish we could have moved further along in this with the prior government.”

When asked whether his proposed plan would follow World Trade Organisation rules, he said “our trade negotiators seem to think it is”.

He also criticised the European Union and accused them of treating voters like “peasants”.