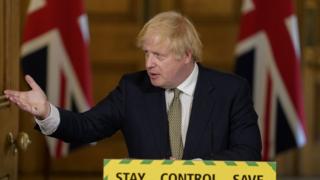 The new format, similar to that used by the White House in the United States, is expected to come in by October.

It is understood an experienced broadcaster will be recruited to host the question-and-answer sessions.

Asked whether we would himself appear every day, the PM said this was “not the plan” but he would be “popping up from time to time”.

Currently, political journalists are able to question the prime minister’s official spokesperson – who is a civil servant – off camera every day.

These briefings are on the record, meaning they can be quoted and attributed to the spokesperson. Under the changes, the briefings will be on camera.

A government spokesman said work would begin shortly on adapting 9 Downing Street, which will be used for the briefings. In recent years, this building has been used by the chief whip and the Brexit secretary.

Nobody has been recruited yet to host the briefings and asked about reports that former This Morning host Richard Madeley was being considered, the spokesman said that was “news to me”.

For several months during the coronavirus pandemic, the government held daily briefings from No 10 every day.

They started on 16 March, following criticism of a lack of transparency over government plans to stem the spread of the virus. They were led by a senior minister – sometimes Boris Johnson – and normally accompanied by scientific and medical experts.

For many years, the White House held an on-camera daily press briefing every day, delivered by the administration’s press secretary.

Under US President Donald Trump, the briefings were stopped for more than a year. In May 2020, new US Press Secretary Kayleigh McEnany held a briefing – the first one in 459 days.

Labour MP Chris Bryant said he was not a fan of the idea in the UK, saying it would divert attention away from Parliament, to whom ministers were accountable.

I don’t like this idea of televised daily press briefings from Downing Street.