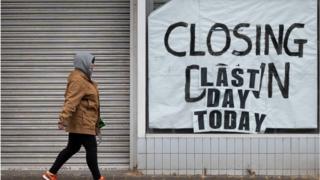 The UK economy suffered its biggest slump on record between April and June as coronavirus lockdown measures pushed the country officially into recession.

The economy shrank 20.4% compared with the first three months of the year.

Household spending plunged as shops were ordered to close, while factory and construction output also fell.

This pushed the UK into its first technical recession – defined as two consecutive quarters of economic decline – since 2009.

The Office for National Statistics (ONS) said the economy bounced back in June as government restrictions on movement started to ease.

But Jonathan Athow, deputy national statistician for economic statistics, said: “Despite this, gross domestic product (GDP) in June still remains a sixth below its level in February, before the virus struck.”

Which parts of the economy have suffered most?

The ONS said the collapse in output was driven by the closure of shops, hotels, restaurants, schools and car repair shops.

The services sector, which powers four-fifths of the economy, suffered the biggest quarterly decline on record.

Factory shutdowns also resulted in the slowest car production since 1954.

The economic decline was concentrated in April, at the height of lockdown.

Clothes stores, bookshops and other non-essential retailers opened their doors in England on 15 June, while construction work jumped after large declines in the previous two months.

What is the government doing about it?

Chancellor Rishi Sunak has said the economic slump will lead to more job losses in the coming months.

Official jobs figures released on Tuesday showed the number of people in work fell by 220,000 between April and June.

But in a BBC interview on Wednesday, he did not waver on ending the government’s furlough scheme of job subsidies, which is winding down and is due to end entirely after October.

“I think most people would agree that that’s not something that is sustainable indefinitely,” he told the BBC.

The chancellor said the government should not pretend that “absolutely everybody can and will be able to go back to the job they had” and said there would be support for creating jobs in new areas.

He said there would be a “fiscal event” in the autumn, addressing reports that the Budget planned for then might be scrapped because of fears of a second wave of the pandemic.