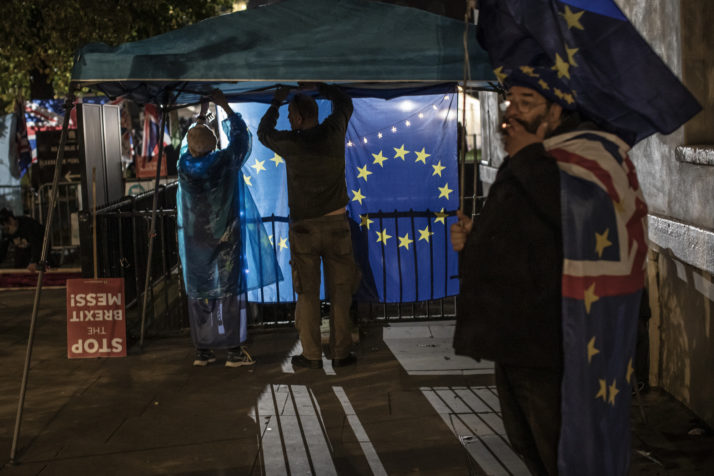 Anti-Brexit demonstrators protest outside the Houses of Parliament in London on October 22, 2019 | Dan Kitwood/Getty Images

The move piles pressure on Boris Johnson ahead of the Tory manifesto launch.

LONDON — Almost 30 campaign groups signed a letter to Boris Johnson and other U.K. party leaders urging them to avoid a “cliff-edge” for EU nationals living in the U.K. who fear for their futures after Brexit.

The Joint Council for the Welfare of Immigrants joined forces with 27 other groups, including The3Million, Unison and Age U.K., to demand an overhaul of the “settled status” scheme that allows EU nationals to register for post-Brexit rights.

The letter was sent earlier this month, but the decision to make it public piles pressure on the U.K. prime minister ahead of the Conservative manifesto launch in the coming days, after the opposition Labour Party on Thursday vowed to change the scheme.

The groups said thousands of the 3 million EU nationals living in Britain will “struggle to obtain their status due to a variety of factors: a lack of awareness about the scheme, a lack of support or difficulty obtaining documentation.”

“No comparable application scheme anywhere has ever succeeded in reaching 100 percent of its audience, and it is unlikely that the U.K. government will manage to do so,” the letter read. “We know that it is the most vulnerable in society — including elderly and disabled people and children — who are at the greatest risk of falling through the cracks.