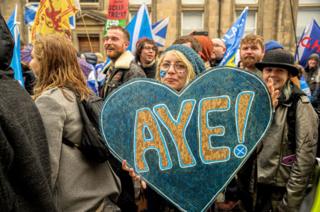 A meeting of Unison’s Scottish council has voted in favour of indyref2 at a time to be determined by the Scottish Parliament.

The motion voted on calls for the powers to hold a vote to be transferred to Holyrood from Westminster.

Nicola Sturgeon has reiterated her desire for another vote but Boris Johnson has rejected the suggestion.

Unison’s Scottish convenor Lilian Macer said: “This in no way pre-determines the views our members may take in the event of an independence referendum, but they should have the opportunity to express their views.

“Unison Scotland defends public services and those who deliver them and it is imperative that we explore the full range of options available to the people of Scotland.”

On Wednesday, SNP and Green MSPs united at Holyrood to pass a motion saying a referendum should be held “on a date and in a manner determined by the Scottish Parliament”.

However, the powers to hold a legally binding vote are reserved to Westminster.

Speaking on the BBC’s Politics Scotland, Scottish Labour leader Richard Leonard called for an “open and honest” discussion about the implications of independence.

He said: “I understand given the prospect of five more years of a Boris Johnson government why some people are driven to anger and despair.

“We will listen to why Unison members reached that conclusion but I’m bound to say the prospectus put forward by the SNP and their growth commission report is one of a very hard dose of austerity that would lead to cuts in public services that Unison and other trade unions work in.”