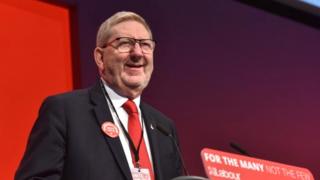 Image caption Len McCluskey is due to stand down in 2022

A battle to control Labour’s largest affiliated trade union is about to get under way.

Unite is hugely influential and under Len McCluskey’s leadership, it backed Jeremy Corbyn financially and politically.

It gave Labour £3m in the run up to last year’s general election – the party’s single biggest donation – and more than £400,000 in the first three months of this year.

Mr McCluskey is due to stand down in 2022 and the election campaign to choose his successor begins next year.

The result of that contest will determine whether the union works closely with Sir Keir Starmer’s leadership, or is willing to be openly critical.

The union’s left-wing, the United Left, had attempted to unite (no pun intended) around a single candidate.

Left wing members were recently balloted – with a choice of Mr Beckett or Steve Turner.

On 18 July, Mr Turner was declared the winner and it was assumed he would be the sole candidate from the union’s left.

This was seen as good news for Keir Starmer, as the assumption in the Labour leader’s team is that a left-wing candidate would win the race to succeed Mr McCluskey – but Steve Turner was seen as someone with whom they could do business.

Mr Turner – also an assistant general secretary, and a former shop steward – had made it clear that he had no interest “a public spat with the leader of the Labour Party”.

And, he added, he would not spearhead attempts to move the party back to the Corbyn era, or support a “war of attrition” inside the party.

By contrast, Howard Beckett has been openly critical of the Labour leadership.

He has accused it of a “wilful refusal” to oppose Boris Johnson, and has tweeted his “despair” at the party’s reluctance to talk about wealth taxes and nationalisation.

He has also advocated the union putting funds in to a new TV venture to challenge mainstream media.

There are fears in Labour circles that this might be at the expense of reduced donations to the party itself.