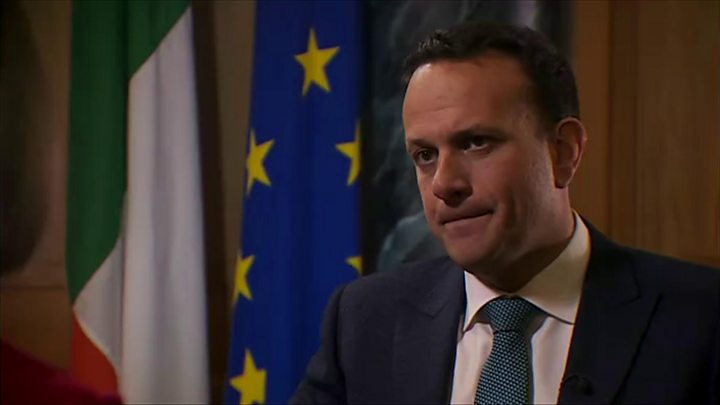 The Irish Prime Minister has told BBC News he believes the EU will have the upper hand in the upcoming trade talks with the UK.

Leo Varadkar compared the two sides to football teams, suggesting the EU would have the “stronger team” due to its larger population and market.

He also suggested that Britain misjudged the first phase of Brexit.

It comes as the Taoiseach is due to meet the EU’s chief negotiator, Michel Barnier, in Dublin.

In an interview with BBC political editor Laura Kuenssberg, days before Britain is due to leave the EU, Mr Varadkar also warned against any attempt by the UK to get a “piecemeal” deal with the EU.

“When I hear people talk about piecemeal, it sounds a bit like cake and eat,” he said.

“That isn’t something that will fly in Europe.”

The Taoiseach said the EU could take the upper hand in negotiations, citing the two sides’ vastly different populations.

He said: “The European Union is a union of 27 member states. The UK is only one country. And we have a population and a market of 450 million people.

“The UK, it’s about 60[m]. So if these were two teams up against each other playing football, who do you think has the stronger team?”

But Mr Varadkar questioned the timetable set by Prime Minister Boris Johnson to get a trade deal with the rest of the EU by the end of the year.

He disagreed with the PM’s claim that there is “bags of time” to sign an agreement, warning “it will be difficult to do this”.

He warned there might have to be an extension to the next phase of the Brexit process, beyond the end of this year, to finalise a trade deal.

However, the Irish prime minister vowed to work “night and day” to try and get it done, saying: “We won’t be dragging our feet.”

In order to get a trade deal, there would need to be legal assurances the UK would not undercut the EU, he said, and everyone would have to agree to a “common set of minimum standards” that would have to be “high standards”.